Social media and big data have been in high focus due to their potentially huge impact on business, society and polity. As more and more data gets created in social media directly by organizations and more importantly, through user generated content, the importance of mining this data was recognized. This research contributes to the same domain and peruses the twitter community before and after an event which is a major breakthrough for an economy. Such an event could be an election for a nation or an economic budget announcement for a country. In this study, the event being monitored is the Union Budget 2016 in India and try to track the conversations surrounding the budget on twitter among the corporates and individual influencers.

The first focus on this paper has been to map the brand personality framework of Aaker with the social media dimensions of users on Twitter.

The dimensions of Brand Personality were mapped with few of the leading indicators which can be derived in Social Media. For example, some of these indicators could be as follows: 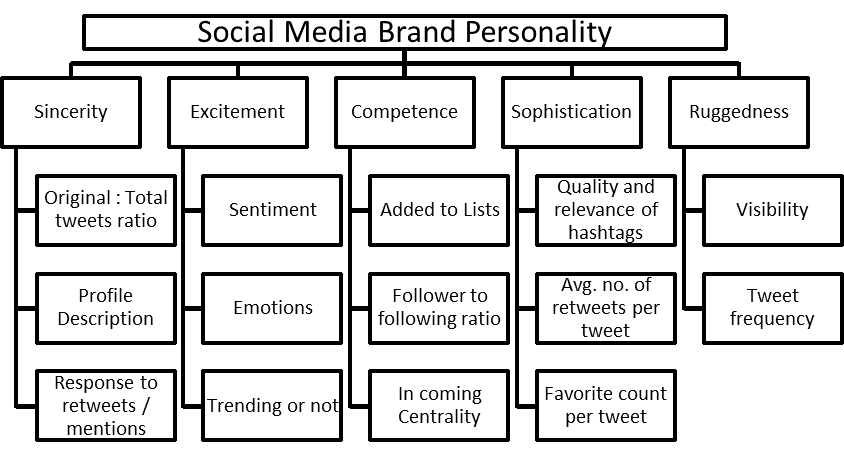 The research taps the occasion to understand the various groups which participate in the online discussion amongst 43,924 tweets from 22,896 users and the pre and post budget twitter metrics are analyzed, deducing the sensitivity of the groups to the day of proposal of the budget. The research framework incorporates twitter analytics and relies on visual and quantitative data, drawing inferences from the intelligence. How the personality dimensions change before and after the event, is also analyzed. This change in dimensions can directly account for the influencing nature of the social media group.

Findings and discussions in brief

For reading and understanding the entire study, one needs to download the full paper. Here we are just discussing some critical dimensions of it. The current study successfully manages to observe that the social media universe can be judiciously divided into opinion groups among the large user base which can be mined for their perspectives and take on urgent topics and events, like the Indian budget in this case. These groups in social media comprise of entities which can exist in the form of Twitter handles, Facebook groups or profiles. By identifying social media metrics which are coherent with the distinct facets of the brand personality framework, the five personality dimensions have been success fully associated with each of the opinion groups identified in the data.

The above table highlights the different user groups and depicts both a high sensitivity and a significant change in mean for some of the personality dimensions. The notation hash (#) represents groups depicting a significant change in mean but with a low sensitivity. The framework brings out the most and least sensitive or rather susceptible social groups based on the percentage change in the values of the metrics mapped to these dimensions, due to the occurrence of the breakthrough event. The results of the analysis can be seen in Table 3.

This framework of social media analytics is particularly useful in identifying the dimensions which are most susceptible intrinsically to these groups due to the occurrence of major events. Both the research and business community can gain significant insight into the Social media behavior of these groups by tracing the sensitivity of these frameworks. For people working in public policy, insights are provided on who are the most sensitive groups whose social discussion may polarize sentiments of an economy. How communities may interact may also be understood by network analysis among the users discussing on a particular topic in a domain. In conclusion, this framework is a new approach for penetrating deeper into the social media network of users and dismantling the intricacies of social media analytics.  Future studies can also look into the generalization of these findings from events and replicating the study across other critical events of a nation.

The paper may be cited as follows:  Lakhiwal, A., & Kar, A. K. (2016, September). Insights from Twitter Analytics: Modeling Social Media Personality Dimensions and Impact of Breakthrough Events. In Conference on e-Business, e-Services and e-Society (pp. 533-544). Springer International Publishing.